Steven Stucky Comments on his New Arrangements of Mozart

Steven Stucky is one of today’s most celebrated composers. A Pulitzer Prize winner, two-time Grammy Award winner, and professor of composition at Cornell University, he is extremely busy, so we are very happy that he took the time to answer some questions about the Mozart arrangements he made for Dolce Suono Ensemble to premiere at our “Mozart and Schubert Spring Festival” on Sunday, June 3 at 3:00pm at Trinity Center for Urban Life, 22nd and Spruce Streets, Philadelphia.
Last season, DSE premiered the work we commissioned by Steven Stucky for our “Mahler 100 / Schoenberg 60” project, Aus der Jugendzeit, a song setting of a Rückert poem, which we performed with bass-baritone Eric Owens. In February, we gave the New York premiere of the song at Symphony Space.

Steven arranged the songs for baritone, flute, cello, and piano for this concert, to be sung by Brian Ming Chu. I will perform with Priscilla Lee on cello and Jeremy Gill on piano. The set includes the often-performed song Das Veilchen (“The Violet”), with a text by Goethe, and Ruhe sanft, mein holdes Leben (“Calmly Rest, My Dearest Love”), with a text by Johann Andreas Shachtner. The latter is an aria from Mozart’s  singspiel Zaide, an unfinished opera originally called Das Serail, which preceded his Die Entführung aus dem Serail (“The Abduction from the Seraglio”) by one year. The third song in the set is Per questa bella mano (“For This Lovely Hand”), with an anonymous text, a virtuoso concert aria originally for voice, solo double bass, and orchestra.

Mimi Stillman: Steven, you have made several arrangements throughout your career, which is no longer routine among composers. Why do you make it a point to work with other composers’ music in this way?
Steven Stucky: I have always enjoyed arranging, transcribing, and orchestrating other composers’ music: songs of Wolf and Schumann, the piano piece Noctuelles by Ravel, Stravinsky’s Les Noces, Purcell’s Funeral Music for Queen Mary. (Or going further — quoting, dismembering, commenting fancifully on other music, as in pieces like Dreamwaltzes [Brahms and Richard Strauss], Whispers [Byrd], and Partita-Pastorale [Bach].) You learn so much when you actually manipulate every note of a score with your own fingers, with your own brain! I never really knew Les Noces till I reorchestrated it myself: a cheeky but effective way to internalize a masterpiece. 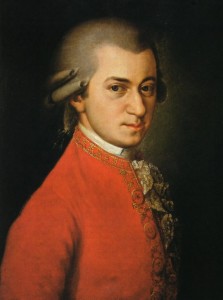 Mimi: I am very grateful that you made these wonderful arrangements for our “Mozart and Schubert Spring Festival.” Our discussions about which pieces would work well in a transcription from orchestra to chamber ensemble of flute, cello, and piano were fascinating. What was the process of selection like?
Steven: When you asked me to arrange some Mozart lieder and arias, of course I agreed. I was already a DSE supporter, but mainly I was ready as always for the chance to man-handle one of my most beloved (but now defenseless) colleagues, Mozart. I proposed the ever-popular “Das Veilchen,” wanting something familiar in the mix for DSE’s listeners, and “Ruhe sanft,” one of my all-time favorite arias. The concert aria “Per questa bella mano” may have been suggested by DSE, or by Brian Ming Chu, I don’t remember. At any rate, I had never heard it before, but I was bowled over, above all by the eye- and ear-popping obbligato writing for a special Viennese double bass of the Classical period. That piece took the most work; the specialized solo double bass technique can’t really be replicated by any other instrument.
Mimi: I think your approach to Mozart’s music would be interesting to our readers. Please tell us about it.
Steven: These are not post-modern arrangements that stress the cleverness, or the alienation, or the winking commentary of some wise-cracking interloper centuries later. That kind of thing — Lukas Foss’s Baroque Variations, some of my own pieces mentioned above, Berio’s Sinfonia — fascinates me, too, but it was not what I felt this program needed. DSE simply needed these songs to be made available to their audience in honest, straightforward versions that fit their flute-cello-piano trio instrumentation well. That’s all I did. The ideas, the notes, and the musical virtues are all Mozart’s.