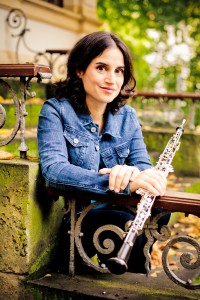 How are you spending your time during this period of cancelled concerts and at-home isolation?

I did absolutely nothing for the first five days after things shut down. I played a dress rehearsal for Mahler Symphony No. 3 (which is for me one of the greatest pieces of music ever written, and I haven’t played for a long time) the evening of March 11. My medical professional husband said he couldn’t believe we were still rehearsing, as they were and still are preparing for the worst. The Mahler 3 concert the next day was cancelled a few hours before we were scheduled to leave. Then I sat around my house in a bizarre, inexplicable, depressed funk and didn’t touch the oboe for five days. One of the reasons I was depressed was I knew I would have to cancel a concert on my new series in Baltimore, “Coffee, Patisserie, and Classical Music,” which I’ve been working very hard to get established, that included seven premieres by young composers. I felt terrible about that. Then it occurred to me that I could play the oboe over the internet for people and I started to become productive.
Now, besides being a new homeschool teacher for my three children and continuing to force them to practice their instruments, I am playing a “Lockdown Oboe Solo Concert” series of eleven concerts from my living room. The first two were marred by terrible audio, but I’ve learned and acquired some technology and things are getting better each show. I am taking advantage of time at home I would never normally have. I am learning new music very quickly (both premieres and music I’ve never played before, some composed recently and some a long time ago. It isn’t an ideal way to play concerts, but it is exciting to cover a bunch of repertoire I’d never normally have the opportunity to “perform” and haven’t studied because traditionally there isn’t a big market for recitals for oboe all by itself. It really does feel like performance even though I’m the only one in my living room. The first three were extra stressful because of handling the technology, but I felt better during the fourth. Normally, musicians just walk onstage and worry about the music, but there is so much else that goes into a performance as well!
[Tune in to Katherine’s weekly solo recitals on Facebook Livestream, Fridays at 7:30pm EDT, here]
2. Please introduce your DSE wind quintet performance of Ravel’s Le Tombeau de Couperin, arranged by Mason Jones [watch our performance here]

I love Ravel’s Le Tombeau de Couperin. Though this may be *the* most practiced piece by oboists everywhere, I first learned this piece on the piano when I was a kid before I was much of an oboist. Ravel orchestrated four of the six piano movements, and they are for me a technicolor version of the piano version (at least the way I played it). Honestly, I think oboists spend way too much time practicing the first twelve bars or whatever of this piece, which in the orchestra aren’t that hard, especially at the expense of other things. But since this piece is on every orchestral audition, it’s the way our musical world has become. I have no desire to practice this one alone, but it is such an amazing piece to play in an orchestra, and maybe even more fun in a quintet because you get to play more parts and connective roles, and really play a part in the overall sweep of the piece. I think this Mason Jones arrangement we did in December is fabulous and I always love playing it. One of the new pieces I was depressed about losing the premiere of I mentioned earlier is for oboe alone (it’s the only one of seven without piano,) and based upon orchestral excerpts by the young composer, Benjamin Stevenson. The first movement involves Ravel’s Le Tombeau de Couperin. Initially, I didn’t love this idea because I think the practice of orchestral excerpts is way overdone, can get pretty boring very quickly, and has ground a lot of oboe playing into a not very artistic place. But this piece is something I can really get behind. It’s a new way of looking at the practice of orchestral excerpts for me; it’s wild and fun and crazy. It’s very timely that you’re giving me the opportunity to introduce one of my favorite woodwind quintets at the the same time I’m preparing to premiere this solo oboe piece in a few days, when they are both based upon the same wonderful piece by Maurice Ravel.
3. Any other thoughts?
I don’t love the ideas of “essential” and “non-essential” work and workers. My husband’s work, where he intubates people and breathes for them, is clearly more “essential” than mine. I spend most of my time playing in an orchestra. Orchestral concerts, large groups of people meeting for “non-essential” purposes, were some of the first things to close down and will be some of the last things to open up. But for so many people stuck at home, the internet has become a cultural lifeline. I think this time will be measured in history not only by the way we dealt medically, financially, and logistically with the pandemic, but also by how the “non-essential” people spent their time at home in this strange new world.