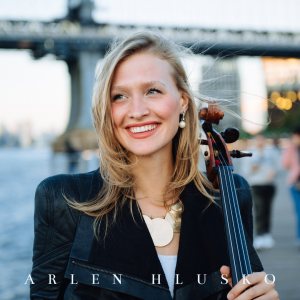 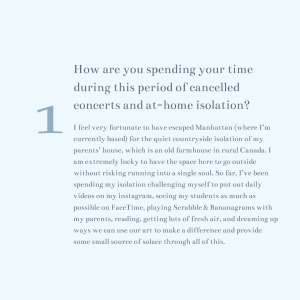 Internationally acclaimed Canadian cellist ARLEN HLUSKO is a dynamic, versatile young artist who has performed extensively as soloist and chamber musician across North America, Asia, and Europe. A laureate of numerous competitions, Grammy-award winner for her collaboration with The Crossing, and recent graduate of the Curtis Institute of Music, Arlen is currently a member of Ensemble Connect (the resident ensemble of Carnegie Hall), and regularly performs with several ensembles based on the East Coast, including the Bang on a Can All Stars and Dolce Suono Ensemble. 2019-20 season highlights include her debuts with the Los Angeles Philharmonic and BBC Concert Orchestra, as well as several performances at Carnegie Hall, and appearances at the Library of Congress, Merkin Hall, Staatsoper Hanover, and the Southbank Centre in London, and her NPR Tiny Desk debut with the Bang on a Can All Stars. She will be a featured performer at various festivals this summer, including Spoleto USA, Tippet Rise, Bay Chamber Concerts, and Music from Angel Fire. Committed to using her music to connect with and serve her community, Arlen founded her own interactive chamber music concert series, Philadelphia Performances for Autism, and is involved with several communities in Philadelphia & NYC, including Carnegie Hall’s “Musical Connections” at Sing Sing Correctional Facility.