Dolce Suono Ensemble extends a hearty welcome to harpist Sarah Fuller, who will be performing with us for the first time at “Russian Roots” on Friday, April 13. This Philadelphia native was based in Philadelphia until this season, when she moved to Baltimore to serve as harpist of the Baltimore Symphony and teach at the University of Maryland. She studied at New England Conservatory, the Glenn Gould School in Toronto, and Indiana University. Philadelphia audiences might know Sarah as chamber musician and a member of Delaware Symphony. I interviewed Sarah so that you can get to know her before her appearance with DSE.

Mimi: What is your musical life like at the moment?

Sarah: I divide my time between playing with the Baltimore and Delaware Symphonies–performing the gamut of symphonic repertoire as well as fully staged opera and ballet productions, running the harp department at the University of Maryland, and playing chamber music whenever I can (which is probably my favorite form of musical expression). I still perform by myself occasionally but I haven’t been concentrating much on solo concerts in the last few years–I personally just find it so much more fulfilling and exciting to collaborate on stage with other musical minds! I feel so lucky that I have such a wide variety exciting performance and teaching opportunities that change from week to week. They say that variety is the spice of life, and in my case, I feel it really is true! 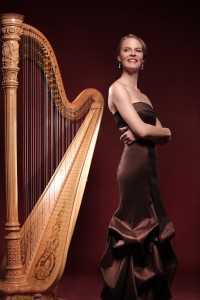 Mimi: Do you come from a musical family and how did your family encourage your talent?

Sarah: I’m sort of an anomaly in my family. (Unless you count two or three generations ago with some relatives who dabbled in singing and composition). Although my parents are big lovers of music and the arts, neither of them had any formal training. I was very very lucky, however, to have two parents who supported all my artistic endeavors whole-heartedly. My mother tirelessly squired me around to music, dance, and art lessons when I was young and she used her personal savings to buy me my first and second (professional sized) harps! My mom always told me that she never wanted me to say “I wished I had…” when I was older.
Mimi: How did you get started on harp?

Sarah: In all honesty, I have a hard time remembering what exactly it was that initially inspired me to turn to the harp. My mother was really great about taking me to a wide variety of live performances and we debate the possibility that it might have been a performance of Prokofiev’s Romeo and Juliet with the Pennsylvania Ballet performing at the Academy of Music (which has a beautiful harp part) that initially perked up my ears and curiosity. My parents were also big classic Hollywood cinema buffs, so there were a lot of Marx Brothers movies being played during my childhood. (To this day, I think Harpo is quite the phenom.)

Mimi: What pieces of music do you turn to most, to listen to and to play?

Sarah: Oh gosh, this is a difficult one to answer…there are so many!
As a soloist, I think our greatest piece in the harp repertoire is Paul Hindemith’s Harp Sonata (1939). In my opinion, it has it all–incredible intricate, almost Bach-like, harmonies and voicings, raw power, gentle intimacy, humor and playfulness juxtaposed with spiritual reverence. I hate to say it, but in my opinion, a considerable portion of the repertoire for solo harp tends toward what I refer to as fluff/schmaltz–and although that can be very pretty, it doesn’t have a whole lot of substance. So this piece by Hindemith is such a treat. For chamber music, I adore Debussy’s Sonata for flute, viola, and harp and Ravel’s Introduction and Allegro (for harp, flute, clarinet, and string quartet). They both have such richness and unique color and I never tire of performing them.
Symphonically speaking, I love the works of Mahler, Britten, and Ravel. They were each such brilliant orchestrators and I think I become a better musician every time I get to sit on stage and listen to the inventive color palettes they each painted with. 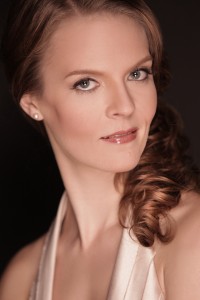 Mimi: What are the greatest challenges, and greatest strengths, in the world of classical music and its role in society today?

Sarah: I feel that the greatest challenge for classical music, and classical musicians, today is keeping performances fresh and accessible so they appeal to a contemporary audience and especially to new listeners. The greatest strength of classical music is that going to a concert is like going to a museum where the art is performed live and the traditions and sounds of another era unfold right before you. The greatest weakness is, again, that going to a concert can be like going to a museum where the contents feel out-of-date, stale, and hard to relate to. There is, of course, much to be said for tradition, but as our audiences grow older we need to continue to reach out to younger generations in order for our art form to survive. I feel that one way to do this is to blur the lines more between genres, eras, and cultures in our programming.

Mimi:  What do you like to do when not playing music?

Sarah: I love to cook! I’ve actually signed up for an Indian cooking class that starts in a month and I’m very excited. And, of course, I love to occasionally splurge on a great meal out. (I’ve really been missing Philadelphia’s fabulous restaurants since I’ve moved!)
I’m also a big film nut, both new and old, and I try to keep up by going to the independent movie theaters when I can. Don’t laugh, but the newest hobby I’ve taken up in the new year is adult beginning ballet class. I’m terrible, but it’s really fun! I love literature and art. My favorite authors are too many to name all, but Fitzgerald, Hemingway, Lewis Carrol, symbolist poets, and David Sedaris are high on my list. I have many favorite artists, too: Calder, Rothko, Caravaggio, Rembrandt, Chagall, Brancusi, and lots more.

Mimi: What would you be if you weren’t a musician?

Sarah: I used to joke that I’d make an excellent truck driver (since I was on the road so much commuting back and forth between jobs in Baltimore, Philadelphia, Delaware, etc. with my harp in the back of my car.) But I always thought it would be so much fun to be either a film critic or a food critic. I mean, getting paid to eat and watch movies all day sounds pretty great! 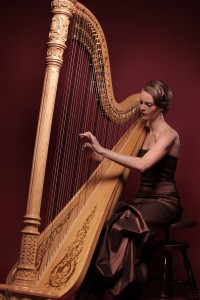