We have entered Year 2 of “Música en tus Manos” (Music in Your Hands) with a sense of accomplishment after the success of Year 1 and are determined to make this year’s installment of the project even more rewarding for all who experience it.

DSE’s “Música en tus Manos” is an innovative outreach initiative to bring chamber music to the Latino community. Our focus is on the more than 200,000+ Latinos in Philadelphia – around 13% of the total population – who are underserved by the city’s cultural organizations. “Música en tus Manos”  is designed to fill this need in a unique, sustainable way. Together with Spanish speakers of all ages from the Latino community, we explore musical masterpieces and use chamber music as a platform from which to offer a unique and engaging musical education.  “Música en tus Manos” offers a chance for the community to interact with musicians and discover and expand their own musical talents. By putting music in their hands, each person will find his or her own musical voice.

Our partners are Iglesia Evangélica Bautista in north Philadelphia, with a membership from Puerto Rico and a dozen Spanish-speaking countries, Casa Monarca in South Philadelphia, which serves the Mexican community, and the Pan-American Academy charter school in Kensington, which provides bilingual education for grades K-8.

Through Year 1 of the project, the 2013-2014 season, DSE presented performances, conversations, instrument “petting zoos” where people can try instruments with the guidance of DSE artists, coachings for instrumental students in Pan-American Academy’s nascent music program, and side-by-side performances with students and music teacher Celina Velez at a DSE Presents concert. The events are bilingual, with DSE Artistic Director Mimi Stillman and other DSE artists who speak Spanish, presenting in Spanish and English.

The concerts and repertoire

“Música en tus Manos” is connected to our programming for DSE Presents, the ensemble’s home concert series in Philadelphia. On Saturday, May 31, 2014, Year 1 of the project culminated with a performance on our series devoted to music by composers from the United States, Spain, and Latin America including Turina, De Falla, Ginastera, Villa-Lobos, Piazzolla, and a work by the Cuban band Irakere arranged for DSE by our percussionist Gabriel Globus-Hoenich. Distinguished composer David Amram was present for the Philadelphia premiere of his work Discussion, which draws on Latin jazz. Pan-American Academy music teacher Celina Velez and her class of recorder students gave a side-by-side performance with DSE artists. The following day, June 1, 2014, DSE presented a free concert, conversation, and “instrument
petting zoo” at Iglesia Evangélica Bautista. We were thrilled to perform to large and energetically engaged audiences at both events.

This season, DSE’s “Música en tus Manos” includes a comprehensive array of events with our three partner organizations as well as three concerts. We launch “The Americas” project this season, which furthers our exploration of music of United States and Latin American composers.

DSE will perform for Curtis Presents at Field Concert Hall, Curtis Institute of Music, on Sunday, April 12, 2015 at 3:00pm. DSE will give the world premieres of commissioned works by Zhou Tian and Katerina Kramarchuk that are inspired in Spanish and Latin American literature. Guest composer Jennifer Higdon will also join us for a performance of her Flute Poetic. The Dover Quartet will appear as guest artists with DSE. On Sunday, May 3, 2015 at 2:00pm we will give a free concert, conversation and instrument “petting zoo” at Iglesia Evangélica Bautista. On Saturday, May 30, 2015, DSE Presents will give its “Música en tus Manos” concert for Year 2 of the project.

For tickets and further details on the concerts, please click here.

We have received enthusiastic feedback from our partner organization leaders and community participants. Our hosts at Iglesia Evangélica Bautista Pastor Fidias and Georgina Echevarría wrote: “It was a privilege for our community to listen to the classical works. We need more exposure to this type of music.”

We are delighted to share with the Latino community the great benefits of listening to and playing classical music: coming into contact with some of the most beautiful creations of humankind; learning life skills such as teamwork, leadership, discipline, and careful listening; and scientifically proven improvements in cognition and academic performance. Our short-term goals are to deepen the Latino community’s understanding of and appreciation for chamber music in diverse styles, with an emphasis on Spanish and Latin American composers; to empower them through active participation in making and discussing music. Long-term goals include creating life-long concertgoers and active music-makers, providing a means of self-expression, and fostering a sense of togetherness among the generations.

Thank you to our funders. Without you, this would not be possible.

Dolce Suono Ensemble won the Philadelphia Knight Arts Challenge 2013 for our “Música en tus Manos” project, one of 43 winning projects out of 1200 applicants. The Knight Arts Challenge, part of the John S. and James L. Knight Foundation, funds innovative projects that engage and enrich Philadelphia’s communities. The grant, $25,000 over two seasons, provides the crucial support needed to make a deep and lasting impact on Philadelphia’s Spanish-speaking community – furthering Dolce Suono Ensemble’s mission of enriching and informing people’s lives through chamber music. The Knight Arts Challenge is a matching grant, which we matched through grants from the Musical Fund Society of Philadelphia, the Yamaha Corporation of America, and the marvelous generosity of private donors. We conducted our first Kickstarter campaign to meet the matching grant challenge. To see it, click here. Our commisioned works in Year 2 are funded in part by a grant from the National Endowment for the Arts. 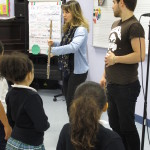 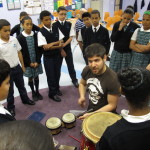 DSE coachings and instrument “petting zoos” at Pan-American Academy, May 2014 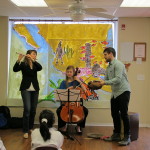 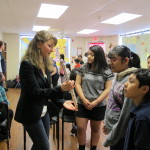 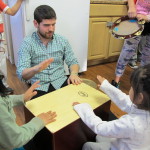 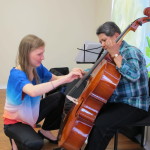 DSE performance and “petting zoo” at Casa Monarca, May 2014 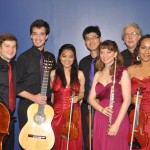 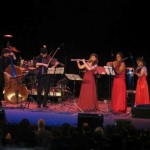 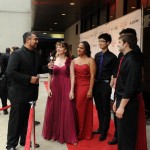 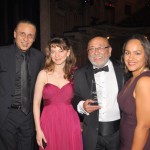 Performing, interview on red carpet, and artists with Eddie Palmieri and Arturo Ortiz 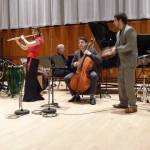 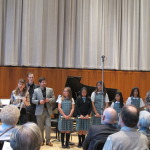 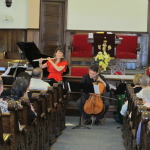 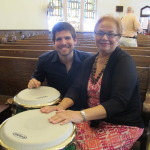 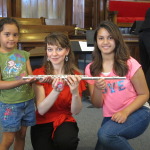