Hunt for the Harmonium

We’re looking for a harmonium to use in our “Mahler 100 / Schoenberg 60 Project” for Schoenberg’s ensemble version of Mahler’s “Lieder eines fahrenden Gesellen” (“Songs of a Wayfarer”). This keyboard instrument is a reed organ with a sound similar to an accordion. While rarely heard today, it was in vogue in the late 19th and early 20th centuries. Among the composers who wrote for harmonium are Rossini, Franck, Dvorak, Guilmant, and Vierne. Mahler included harmonium in his Symphony #8, and Schoenberg used the instrument in his arrangements of works by Mahler and Bruckner, to fill out some of the textures missing in the reduced instrumentation.

In our performances of Mahler’s “Lieder eines fahrenden Gesellen” on May 11 & 15, bass-baritone Eric Owens will sing with our Dolce Suono Ensemble. Jeremy Gill will be playing harmonium, so he and I have been testing out instruments that are sometimes used to replicate the sound of a harmonium. We’re also tracking down the real thing. Then the trick will be moving it around to our rehearsal and concert locations!

I thought I’d share some of the instruments we’ve been trying. Here is Jeremy with the portative organ that lives in the basement of the Kimmel Center in Philadelphia. This instrument works well for Baroque music but its range is just shy of what we need for the Mahler/Schoenberg. 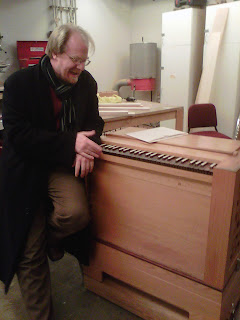 ?
?Here we are at Cunningham Piano Company, where associates Milo and Tim ?showed us many instruments. This digital keyboard has accordion stops that sound a lot like a harmonium. This one’s on the short list! 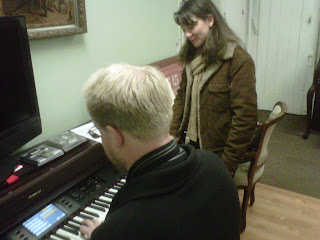 Until next time,
Mimi Stillman